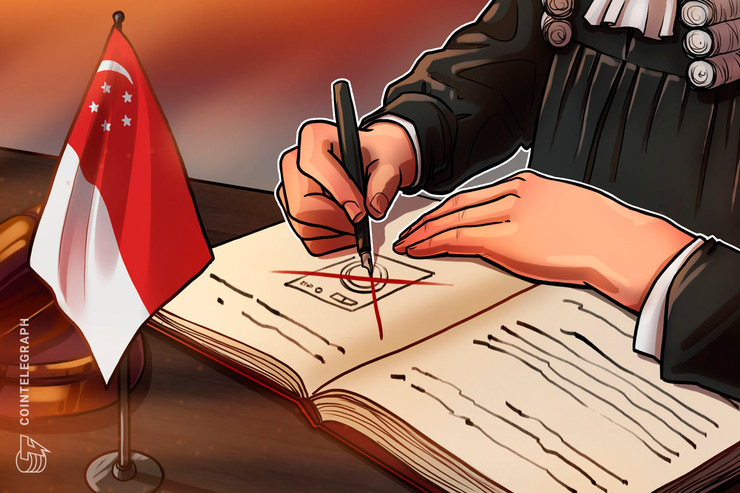 As crypto continues its foray into the mainstream financial world, more countries are recognizing digital assets legally. Singapore is the latest to join the party. On Jan. 28, the Monetary Authority of Singapore’s (MAS) Payment Services Act went into effect, setting up a framework for the regulation of payment-related activities in the country.

Given that the bill requires that all crypto businesses get registered and licensed (and partly resembles the nature of 5AMDL measures recently enacted in Europe), now seems like the time to have a closer look at Singapore’s regulatory model for crypto and to see what it might mean for the industry.

“Electronic Payments Society” — how the bill was conceived

MAS has been planning to change the regulations since at least 2016. In August of that year, the financial regulator published a paper suggesting to modernize the regulatory framework, making it flexible enough to cater to disruptive technologies emerging in the payments and remittance fields. The move followed MAS Managing Director Ravi Menon’s announcement of the agency’s plans to push for “an Electronic Payments Society.”

Just one year later in November 2017, MAS released another paper on the proposed Payment Services Act. It specifically outlined that it was working toward regulating cross-border money transfers, e-money issuance and digital currency services, among other things. The agency stressed that it aimed to improve user and merchant protection, create space for the growth of the fintech-friendly ecosystem, and bolster cybersecurity.

MAS explicitly stated in the document that digital currency intermediaries pose money laundering and terrorist financing risks, giving a glimpse into what kind of cryptocurrency regulation the upcoming bill might entail.

Another year went by, and, in November 2018, MAS published the finalized edition of the Payments Services Act (PSA) and submitted it before parliament weeks after Menon had said he intends to “bring together” banks and crypto businesses. The document was signed in January 2019, putting Singapore in line with Japan, Malta, Switzerland and a few other countries that have enacted real, practical regulations on cryptocurrency.

How the PSA works

Essentially, the PSA enables Singapore’s central bank to control any payment systems it considers “crucial to financial stability.” It also introduces a mandatory licensing regime for payment service providers that will be required to apply for one of three licenses depending on the nature and scope of their operation.

The first license is for “money-changers,” and it regulates providers primarily against money laundering and terror financing risks. A more comprehensive “standard payment institution license” is designed for entities that transact over $3 million per month, provided they have access to less than $5 million of float each day. A “major payment institution,” the most strictly regulated tier of licensing, is intended for larger service providers.

“The PSA makes a number of changes to Singapore’s regulation of payment services beyond crypto, but bringing crypto services providers within the scope of AML regulation is a key aim of the act.”

More specifically, the document states that MAS is going to regulate the so-called “digital payment tokens.” DPTs are tokens that have a digital representation of value that is not pegged to any currency, are stored and traded electronically, and represent “a medium of exchange accepted by the public.”

Most conventional cryptocurrencies like Bitcoin (BTC) and Ether (ETH) do fall into that category. Notably, MAS’s definition of digital payment tokens ignores subspecies like “security tokens,” “payment tokens” or “utility tokens,” which are used by financial regulators in the United States. This means that the companies behind cryptocurrencies will have fewer opportunities to dodge certain regulatory requirements.

Starting on Jan. 28, Singapore-based DPT businesses will have one month to register with MAS. After that, they will be given a six-month period, during which they will have to apply for a payment institution license via an extensive online form that enlists three types of DPT businesses: exchanges, brokers and custody.

“We’ll have to wait and see how the licensing process works in practice,” said Carlisle, adding that it is not yet clear how difficult it will prove for businesses to apply for a MAS license:

“Hopefully, MAS will make the process one that doesn’t place an unnecessary additional burden on smaller businesses that can demonstrate compliance. Singapore has always expressed a desire to be a home for new financial innovations, so if it’s carried out in the right way, the licensing process should work to keep non-compliant actors out without hindering the ability of new products and services to come to market.”

In the long run, the act could strengthen local crypto firms and essentially make them more legitimate in the mainstream financial world. Carlisle also told Cointelegraph that some problems could be expected at the beginning:

“Crypto exchanges and other service providers in Singapore will now have to ensure they have appropriate compliance arrangements, including technology systems, in place to adhere to the requirements. However, companies that are proactive in preparing for these changes position themselves for success over the long term by ensuring they can meet regulatory expectations. What’s more, companies are proactive in adjusting to the new requirements can protect their platforms from money laundering and other financial crimes — something that is essential to ensuring a strong reputation and long-term business growth.”

As Dave Jevans, CEO of blockchain security firm CipherTrace, pointed out in an email exchange with Cointelegraph, the regulations that MAS is proposing “will favor more established companies that have more resources than their smaller competitors.”

“The licensing application process will not be an easy one,” admits Ethan Ng, CEO of BiKi Exchange Southeast, which is based in Singapore and is planning to apply for a license via MAS. He explained to Cointelegraph:

“This will take time, and the expected drawbacks during this period of regulatory transition may include a gradual consistent sell and change of loyalties for users to a regulated exchange. This will lead to lower liquidity for unregulated entities and their eventual closure or to seek regulatory licensing in a different jurisdiction. We should expect a period of correction in the Singapore digital tokens market as companies get adjusted to something as new as this.”

Nevertheless, Ethan Ng remains overall positive about the PSA, saying that the benefits outweigh the drawbacks and that it will stimulate the local ecosystem, “It will also attract more credible blockchain companies to be based and licensed in Singapore. This is a critical move towards a new era for the industry.”

Similar to AMLD5 but more gentle

Crypto regulation has unfortunately proven lately to be a particularly pressing issue in Europe, where 5AMLD came into effect earlier on Jan. 10 — for some crypto companies, the new compliance regulations had a devastating effect, forcing businesses to either close up shop or move their operation out of Europe.

Cal Evans, founder of compliance and strategy firm Gresham International, told Cointelegraph that “the major difference” between the PSA and 5AMLD is that Singapore’s law is focused on “payment providers” while the European laws are focused on any company dealing with crypto:

“This is very much in line with Singapore’s view that payment services can involve cryptocurrencies. Singapore was also dealing with a wave of exchanges being based in the jurisdiction, this created a massive workload for the Money Authority. Unlike the European law, which is (mostly) brand new, the Singapore law takes existing financial laws and makes them easier.”

In Carlisle’s view, the PSA is “broadly aligned” with 5AMLD, and like the European regulatory measures, it follows guidance proposed by the Financial Action Task Force, the global anti-money laundering agency.

In June 2019, MAS stated that all DPT-related transactions will be considered “to carry higher inherent money laundering and terrorism financing risks due to the anonymity, speed and cross-border nature of the transactions.” Furthermore, in December 2019, the financial regulator confirmed that it “intends to amend the PS Act to fully align with the most recent enhancements to the FATF Standards.”

However, experts predict the situation is likely to be less dramatic for crypto businesses in Singapore. Evans told Cointelegraph that Singapore is unlikely to give up the leadership position in regards to positive crypto regulation:

“Many of us will remember that Singapore used to be THE location to conduct an ICO after that, Singapore became THE location to run an exchange. Essentially, Singapore became inundated with cryptocurrency companies which were allowing millions of dollars to flow through Singapore banks with limited KYC. Singapore intends to maintain its status as one of the best financial service centers in the globe. This act goes a long way to ensuring that Crypto does not become the anomaly which stands out.”

Carlisle, in turn, stressed that the MAS has considered the needs of the private sector while preparing the act:

“The new requirements are aimed at making Singapore’s crypto sector less vulnerable to financial crimes such as money laundering and terrorist financing, but in a way that allows business to continue to provide new innovative services. […] Regulators in Singapore have also undertaken an extensive public consultation process that is helping to ensure that the concerns and views of the private sector are taken into account.”

Indeed, MAS itself has been reassuring actors that it will do its best not to hinder innovation. As Loo Siew Yee, assistant managing director at MAS, declared in a statement:

“The Payment Services Act provides a forward-looking and flexible regulatory framework for the payments industry. The activity-based and risk-focused regulatory structure allows rules to be applied proportionately and to be robust to changing business models. The PS Act will facilitate growth and innovation while mitigating risk and fostering confidence in our payments landscape.”

A number of crypto businesses based outside of Singapore, like Japanese crypto exchange operator Liquid Group Inc. and London-based trading platform Luno, have already expressed their plans to apply for a MAS license, which could also be seen as a positive sign for the industry. “We welcome the Act with open arms,” Liquid’s CEO Mike Kayamori told Bloomberg.

While both Liquid and Luno already operate in Singapore, Australian crypto exchange Independent Reserve is now planning to expand to the South-Asian country, citing “a number of positive moves by Singaporean regulators, including the introduction of the Payments Services Act.”

Independent Reserve CEO Adrian Przelozny told Cointelegraph that: “Applying for our license is more onerous than ordering a coffee, however, the Payment Services Act provides a good standard for crypto exchanges to follow in order to ensure a good level of consumer protection and high integrity of operators.”

He clarified that his exchange already has “the majority of the controls and procedures” required by MAS in place. “When we had our meetings with MAS, they clearly demonstrated that they understood crypto and the blockchain space well,” Przelozny added.

Finally, a closer look at the PSA reveals some interesting details — specifically, the document mentions a central bank digital token. “This is possibly the most exciting element in the whole text,” Evans said in a conversation with Cointelegraph, elaborating:

“The government of Singapore just dropped us a massive teaser of what’s to come. The language is fairly unambiguous, it seems that a central bank digital token could be very much on the way for Singapore.”